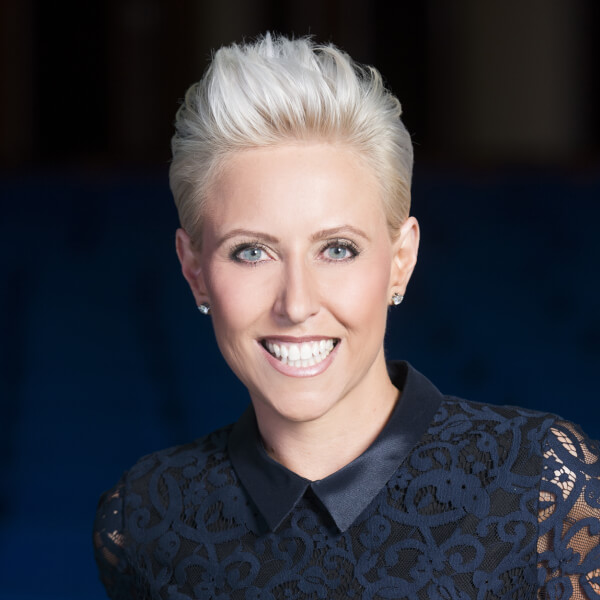 Laura Schwartz, the Director of Events for the Clinton Administration, created and executed more than 1,000 White House events including State arrival ceremonies and dinners, America’s Millennium Celebration and NATO’s 50th Anniversary. While producing the President’s events on the world stage, Laura demonstrated the ability to inspire a nation and the world through powerful productions. She arrived at the White House, with no political connections, at just 19 years of age as a volunteer answering phones in the press office. Immediately proving her value, Laura climbed her way up the ranks to Staff Assistant, the Midwest Press Secretary, the Director of Television, and ultimately, the White House Director of Events. Following the administration, Laura travelled the world with Former President Clinton for the Global Initiative.

Laura has been taking her empowering presentations to stages across the world since 2001 and is well known for her dynamic keynotes and as a mistress of ceremonies for multi-day conferences and events. Whether addressing an intimate gathering of 30 or a crowd of 30,000, Laura captivates audiences with her positive energy, expertise and enthusiasm. Laura has received high marks for her work as emcee for many prominent corporations including Hewlett Packard, Microsoft, Mercedes Benz, Cathay Pacific, HSBC, BlackRock, Pacific Life, MACY’S, Hilton Worldwide, Oprah Winfrey Network, Hyatt, PepsiCo, Coldwell Banker, Asembia Pharmaceutical and more.

In “Eat, Drink & Succeed!” Laura shares the secrets to building powerful, effective partnerships in our companies, communities and beyond, adding color with personal anecdotes from her life and White House years. Through her acclaimed speaking series, she takes those same details to stages, boardrooms, classrooms and ballrooms around the world empowering, motivating and inspiring each audience to Eat, Drink & Succeed!

Laura’s nonpartisan commentary is well respected both domestically and internationally. She is a regular guest host for Larry King on “Larry King’s Politicking” and is an international television commentator speaking about leadership, networking and world events. She was the on-air political contributor for Fox News Channel from 2004 to 2007, covered the 2008 presidential campaign for “The CBS Early Show” on CBS, a regular on Sir David Frost’s “Frost Over the World,” and the special correspondent to “Larry King Live” at CNN for the 2008 Presidential Elections. Today, Laura appears on the “BBC World News,” China’s CCTV and BBC Wales.

HONORS AND BOARD INVOLVEMENT

Laura is widely recognized for her civic, philanthropic and professional leadership and is humbled to have won numerous awards and accolades. In 2015, Laura was the first American woman to be featured as the cover story of The UAE’s leading entrepreneurial magazine and appeared as a featured contributing writer to Fast Company magazine. She has been recognized by various magazines; named one of the Best Keynote Speakers by Meetings and Conventions magazine, as well as by Successful Meetings magazine. She was also featured in the Meetings Professional magazine of MPI, named an “Elle Boss” by Elle magazine and featured in Glamour and Marie Claire. She serves on the boards of the American Heart Association, the Clean the World Foundation and Common Threads. She was named one of the “100 Most Influential Women in Chicago” by Today’s Chicago Woman magazine and named one of Chicago’s “Most Bold and Beautiful” by Chicago magazine for her community involvement. In 2009, the prestigious Oxford Union in England invited Laura to speak on the Foreign Policy Legacy of the United States and the role of Women in the World.

She travels extensively both domestically and internationally to work with Fortune 500 companies, independent businesses, industry associations, universities and non-profit organizations, motivating people from all over the world to reach their fullest potential!